The Fine Arts have been an integral part of Howard University from the very beginning. 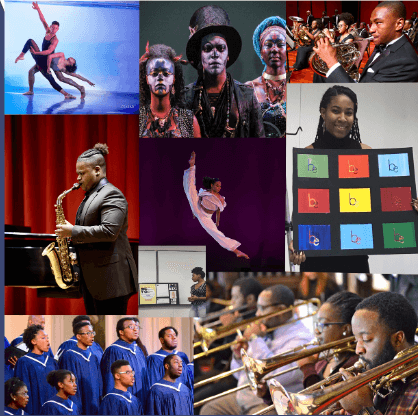 For fifteen years prior to that date, the University administration had regarded the eventual establishment of a College of Fine Arts as a desirable educational cultural goal. The realization of this goal almost precisely at mid-century was an event of great significance in American education, which testified not only to further enrichment of the educational resources of Howard University but also to the vast potential influence that the University would wield in the areas of professional education and creative activity. The completion of a new building to house the Arts at Howard under one roof is additional evidence of the capacity of the University to sustain an integrated growth of the Arts.

The School of MUSIC of the College of Fine Arts was organized in 1914 by vote of the Board of Trustees upon recommendation of the President of the University, Dr. Stephen M. Newman. It was then called the Conservatory of Music. The circumstances which led to the creation of this new unit within the University may best be explained in the words of the writer of the following statement which appeared in the University Bulletin at that time.

The work of the Music Department of Howard University has grown in standard, excellence, and success, until the time has come when it should take some definite name under which it can realize many of the great possibilities which lie before it. It will, therefore, be designated, hereafter, by vote of the Board of Trustees, as the Conservatory of Music of Howard University.

The School of Music (now Department of Music), under the dynamic leadership of Dean Warner Lawson, was admitted to membership in the National Association of Schools of Music on September 1, 1944, the first music program in the Washington area to gain such membership. In January 1974, the School of Music was reorganized as a department within the College of Fine Arts.

ART at the University became a matter of formal instruction in 1921 when the Department, then a part of the School of Applied Science, announced courses in freehand drawing and watercolor painting as features of the curriculum of architecture. In 1923, under leadership of James V. Herring, the Department of Art was formed as an autonomous unit with a four-year curriculum involving both liberal and technical studies. In 1927, the Department presented its first candidates for the degree B.S. in Art, and at the same time won recognition through accreditation by the College Art Association of America.

In 1933, the Department of Art was transferred to the College of Liberal Arts and its curricular offering revamped to harmonize with the requirements in general education. Its development was not curtailed thereby, however, only redirected. In 1947, a graduate program in Art was added leading opportunities for specialized professional study which the new College of Fine Arts will foster. The Department of Art currently holds accreditation membership in the National Association of Schools of Art and Design Commission.

The Department of THEATRE ARTS (formerly the Department of Drama) originated from course offerings in Speech. By 1870 an annual departmental oratorical contest had been developed. Initially, public speaking was an extracurricular activity without credit. On December 5, 1874, however, the University began granting academic credit for this work. In 1899, public speaking was extended beyond elocution to include review of elementary sounds, position of the body, breathing, production of tone inflection, modulation, and emphasis. This work was implemented under the supervision of Coralie Franklin Cook, a graduate of the National School of Oratory, Philadelphia. Such was the beginning of the intensive study of public speaking as an art at the University, although it was not made compulsory until February 8, 1911.

Ernest Everett Just came to the University in 1909 as an instructor of English and, together with a number of students, organized the first drama group, the College Dramatic Club. For several years, this club gave performances annually at the Howard Theatre, a local legitimate theatre in Washington, D.C. The financial success of the College Dramatic Club was evidenced by its donation of a clock to the Andrew Carnegie Library, formerly the School of Religion.

During the period from 1919 to 1925, drama at the University reached a peak both financially and technically. In 1919, T. Montgomery Gregory was appointed head of the Department of Speech. Under his direction, courses in Dramatic Art were offered for academic credit for the first time and the College Dramatic Club became known as the Howard Players. The applied arts of acting, character portrayal, technical work for the stage, the making of costumes and production management became the course offerings in Dramatic Art, which had its own business office, costume rooms and scenic workshop.

The Department of Drama at Howard University was established in 1949, under the chairmanship of Dr. Anne Cooke Reid, after the Howard Players returned from a European Tour serving as ambassadors of goodwill which was the first cultural exchange on a student level after World War II. They toured two plays throughout Norway, Sweden, Denmark and Germany for a three-month period. The Howard Players, an essential part of the Department, one of the oldest university groups in the United States.

In 1960, the Departments of Drama, Art and Music merged to form the College of Fine Arts and the three departments moved into the newly erected Lulu Vere Childers Hall with its adjacent Ira Aldridge Theater. Theatre critic Richard Coe of the Washington Post labeled Ira Aldridge Theater, "one of the finest facilities in Washington" and productions were often hailed as being creative and fine examples of college theatre.

The Department of Music

The Department of Art

The Department of Theatre Arts